An initiative such as Albaola and all that goes on in its interior could only come about in Pasaia. It was from this coastal village, formerly Europe’s main whaling port, that large-scale Basque expeditions left for Terranova, now Newfoundland. The essence of seafaring at its purest. 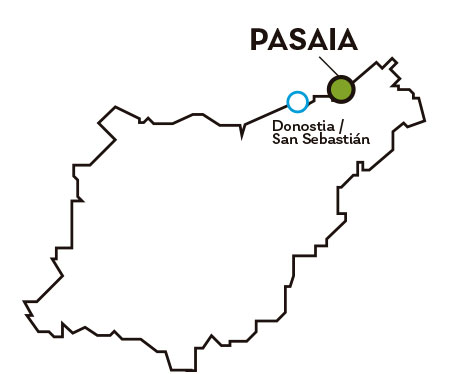 Pasaia is one of the major attractions of the Basque coastline and the province of Gipuzkoa. A seafaring tradition combines with gastronomy around a bay with breathtaking views. A stroll through the streets of Pasai Donibane or Pasai San Pedro shows us how the tradition of fishing vessels is still alive in every nook and cranny, and in the daily lives of those who live on either side of the channel.Albaola is a must-see at this location. In Pasai Donibane we take the motor boat to Pasai San Pedro and arrive at this Basque Sea Factory, a shipyard-museum where visitors can look on as artisans build a full-scale model of the San Juan whaling vessel, a 16th century Basque galleon which sank off the coast of Canada. The guided tour takes us right back to those days of voyages to Terranova, when whalers loaded their ships with cider, and the ships were built “by hand”, just like they are doing now in Albaola.A few metres away we find the Mater Ecoactive Ship-Museum, a tuna boat open for visits, recreating traditional fishing processes and making the visitor feel like a genuine arrantzale. But it does not simply remain in the port – one of the activities available is a fishing trip, an experience for the brave, and most especially early risers.Returning from the visit to Albaola, we find that Pasai Doibane is another of the gems of Pasaia and Gipuzkoa. This is a fishing village with a single street, featuring some of the best seafood restaurants in Gipuzkoa and Euskadi. It is so special that French novelist Victor Hugo described it with much admiration in his book ‘Les Pyrénées’. You can also visit its Museum, and continue along the main street to the north harbour mouth, revealing a landscape similar to a fjord, or go up to the Santa Ana hermitage for a fine view of the port.Pasaia awaits you by sea in a range of boat trips, or by land. Whatever the means, it is just not the same to be told about it as to see it for yourself

You can find out more about which cookies we are using or switch them off in settings.

This website uses cookies so that we can provide you with the best user experience possible. Cookie information is stored in your browser and performs functions such as recognising you when you return to our website and helping our team to understand which sections of the website you find most interesting and useful.

This website uses Google Analytics to collect anonymous information such as the number of visitors to the site, and the most popular pages.

Please enable Strictly Necessary Cookies first so that we can save your preferences!